Kingsville police say a man, who was believed to be armed with a gun, forced his way inside a home.

Police were called out to the 1200 block of Yoakum Avenue just before 5:00 a.m. Sunday morning.

Kingsville police say a man was driving a stolen pickup truck and hit a car at a home.

The man allegedly ran to the front door of the home and forced his way in.

Police received reports the man was armed at the time, so the Kingsville SWAT team was called in.

Eventually, police say the suspect released the family and police were able to take him into custody.

Police are searching the home for a weapon. Charges could be filed later, according to Kingsville Police Chief Ricardo Torres. 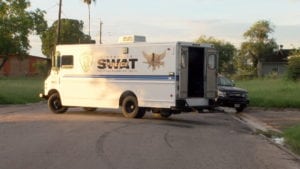